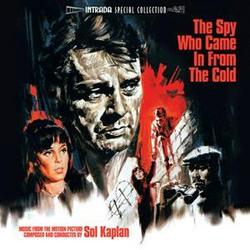 The Spy Who Came in from the Cold

The Spy Who Came in From the Cold marked the beginning of a brief stint of projects Sol Kaplan would score for Paramount Pictures in the mid '60s, including Judith in 1966. He wrote a lonely, melancholy theme that captured both with the film's cold, monochrome look and Richard Burton's haunted, morally exhausted character.

The melody, often performed as a gloomy saxophone solo shrouded in a heavy, relentless march of rumbling, low piano notes, dominates the score, repeating as if to underscore the futility of a bleak and quietly angry view of the world. The Spy score features a library of extended piano effects, created by striking, brushing or plucking the strings in various ways to create resonant, highly atmospheric sounds. These effects permeate the score, swamping the cues in mysterious, nocturnal textures and adding to the feeling of gloom and uncertainty.

For this release, Intrada presents not only the original stereo LP rerecorded program sourced from the master tapes, but also the film recording, complete and in stereo from the master elements stored at Paramount.