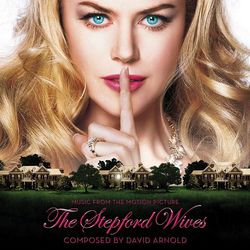 La-La Land Records and Paramount Pictures are proud to announce the world premiere release of David Arnold's incredible score to the 2004 film The Stepford Wives.

Big, brassy and very melodic, this haunting comedic score has been requested for years by film score fans and now it is finally here! Clocking in at nearly 60 minutes, this never before released score also contains numerous bonus tracks. Tim Greiving takes the listener behind the scenes of the score and the film and examines the fascinating history of the project.