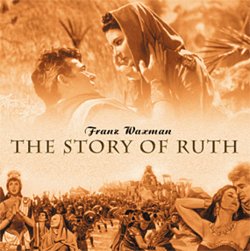 The Story Of Ruth

While not an unjustly overlooked motion picture, Franz Waxman's contribution to the mammoth production was both an enormous undertaking and towering achievement. An intimate epic to be sure, The Story of Ruth possesses a character strikingly different from the more famous biblical fare of the time. Waxman's music is measured and dramatic, exotic, beautiful and very emotional.

Waxman's score, as so many great ones have, untimely fell victim to its own film's lack of success and has been largely lost to the sands of time. No soundtrack album was ever issued and only Waxman's concert suite from the score has, before now, found its way to the commercial market. In a major restoration undertaking, Varčse Sarabande Records and Twentieth Century Fox are proud to present over seventy minutes of Waxman's powerful music from The Story of Ruth.