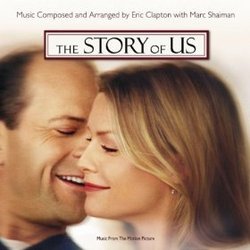 The Story of Us

Review: Story of Us, The

Rob Reiner, who brought us When Harry Met Sally... recently returned to the theater of the sentimental with The Story of Us. Focusing on a marriage over fifteen years, the film starred Bruce Willis and Michelle Pfeiffer, and after some lackluster reviews and a meager box-office turnout, the film left the theaters. Although it had a short run on the silver screen, the music in the film was certainly notable. Written by Eric Claption with Marc Shaiman, the score is not surprisingly very guitar heavy. It's a light and airy score that I found to be very enjoyable to listen to.

Beginning with an upbeat song by Clapton, "(I) Get Lost", the album immediately grabs the listener. The score bits, which as I indicated were dominated by guitars, were very relaxing and entertaining. The use of a solo vocalist in "The Girl In The Pith Helmet" was a pleasant and welcome addition to the score. Some moments are soft and emotional, as in "Everything I Love Is In This Bed". Other cues are more upbeat and border on whimsy, such as the "Busy Baby Montage". Some cues were filled with Shaiman's influence, such as "I Hate The Kirbys" and "Love In Venice". But one thing that was rather noticeable was how short the cues tended to be, and the amount of repetition present in the score.

I also particularly enjoyed the inclusion of a few source cues, such as the jazzy licks of Ruby Braff & His New England Songhounds performing "Keepin' Out of Mischief". A great song (by Clapton again) was the live edit of "Wonderful Tonight" - a great inclusion on the album. Another song that made a welcome appearance was Mason Williams' "Classical Gas" - which was used to perfection in the trailer for the film.

Although the cues are a bit repetitive at times, the expert performances by Eric Clapton on this album and the relaxing score make this album worth taking note of. Released on Reprise Records, The Story of Us is an album I would strongly recommend to anyone who enjoys contemporary music.