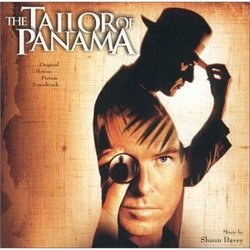 The Tailor of Panama

Performed by
The Irish Film Orchestra

Review: Tailor of Panama, The

The Tailor of Panama is a story about deception, manipulation, and lies. Pierce Brosnan is British Spy Andy Osnard (in a way the "anti-Bond") who is sent to Panama as punishment for botching an assignment. Finding boredom setting in rapidly, he quickly starts to pressure ex-con-turned-tailor Harry Pendel (Geoffrey Rush) for any information that might be useful. Pendel doesn't have anything useful, so he starts to make things up. The resulting snowball of a film is funny, slinky, manipulative, and very much in the vein of Dr. Strangelove. (Of course, it's also heavily "inspired" by Our Man in Havana, but that's another story for another day.) Directed by John Boorman, the delicious score was written by Shaun Davey (Waking Ned Devine).

Beginning with the main title, "Harry Pendel, The Tailor of Panama", the score immediately takes on a slight Irish edge with Davey's inspirational twist on "Greensleeves". The use of percussion and guitars is exemplary, and the track is a true pleasure to listen to. The other theme isn't as peppy, as heard in "Andy Osnard, Spy", but it still retains the "Greensleeves" motif. Much of the music has a very "Carter Burwell" feel to it. (Interestingly enough, the advance press notes incorrectly listed Burwell as scoring the film.)

More traditional underscore with slight peppering of Latin rhythms dominate the soundtrack. The drama comes to the fore in "The Silent Opposition Angle" and the military angle comes to play in "The Tailor At The Palace". A very funny scene involving a bordello and a vibrating bed is recalled in "The Vibrating Bed", a nice Latin-themed number. Tension rises in "Harry, A Thief In His Own Home" and "Ten Million". But the climax of the film starts to come together with "Harry's Drive Through The Carnival" and "Lousia's Confrontation And The Death Of Micky Abraxis", two powerful and dramatic cues that allow Davey to go full out with the orchestra and guitars.

The actual climax happens with "The Ambassador, The Chase And The Helicopters" as the whole plan falls apart. It runs for a little over seven minutes long, and is a truly tense track. Ending with "Harry's Confession / End Titles / 'Todavia Cantamos'", the film calms down a bit after the rollercoaster of a finale, and Davey wraps up the score hinting at all of the themes he's used throughout the score. "Todavia Cantamos" is sung by Rita Connelly, and her performance (and Davey's arrangement) is a very emotional one.

Running about 49-minutes long, the score is more than adequately represented on the album. This was Davey's fourth feature film, and I eagerly await his future projects. If you get a chance, see the film (most likely on video at this point). It wasn't a huge box office success, but it's definitely worth a go. So is the soundtrack, which I'm sure you'll enjoy and is well worth it.