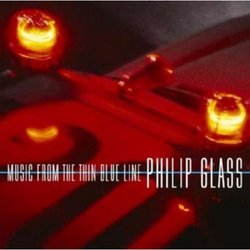 The Thin Blue Line is one of the most influential films that nobody has ever seen.  Errol Morris's startling documentary was responsible for the release of an innocent man from death row, shedding light on the murder of a Texas police officer, and the subsequent rush for conviction.  The merits of the film could fill pages (and have), but this is a review of the score by Philip Glass, so I will leave the film synopsis at that.

Up until just a few months ago, though, listeners to Glass's score would in fact hear the whole film.  In an odd move, Nonesuch released Glass's original score on an album which included not merely excerpts, but every line of dialogue (and sound effects) from the film.  As compelling as this dialogue is, many listeners were dismayed to get the album home and find only one track from Glass's score unobstructed by dialogue.  With the effects-laden album, and many a story about Glass being tapped at the last hour to do re-writes where Morris sought a different musical vibe, the release of Glass's full score on Orange Mountain Music is a chance not only to hear the music free of dialogue, but to hear a number of cues not included in the film.

In a nutshell, this score is typical late-'80s Glass.  It is scored for a small ensemble with emphasis on string quintet and winds, with only a few bits of prominent keyboard work.  The mixing and mastering on this new album are consistent with other recent Glass re-releases / re-recordings, meaning that a lot of the "edge" has been taken off of the original recordings.  With material like this, that tends to be an improvement (as opposed to the muddled sound of the new Koyaanisqatsi).  However, the "Prologue" - here titled "Looking" - which was the highlight of the original disc, has been extended and a bit muffled here.  I suppose you give a bit, you take a bit in such a case.  The rest of the score falls right about in the middle of Glass's film scoring work - it is largely ambient underscore, with very little development, but if that's a problem for you, you probably have little interest in a Philip Glass album to begin with.  (It's also worth noting that two of the main themes from this score would later be reworked, and find their way into Glass's solo piano pieces - the "Metamorphosis" cycle - and The Hours.)

The score is at its best is when it gets a more bouncy vibe, with the brass and strings playing syncopated rhythms against sustained winds and (surprise!) a drum set.  Indeed, the highlight of the new material on this album is, far and away, "Miller's Theme."  As far as I know, this is one of only two Glass recordings featuring electric guitar.  If you've heard Mishima, you should have a good idea of the style in this cue (which is reprised at the end of the album) - twangy, surf-ish guitar, along with a simple backbeat and syncopated lines in the winds.  It's a catchy, fun track, and the best reason to pick up the album.

In closing, I doubt that anyone who's gone to the trouble of reading this far would not enjoy this album.  That's what's delightful about reviewing Glass - you know that most of the time, the reader either gets him, or doesn't.  If you're not already a fan, this probably won't be the album that wins you over.  If you are a Glass supporter, though, this should make a fine addition to your collection... a dialogue-free addition.