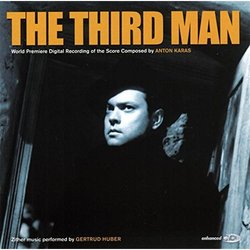 It seems as though every country has a cinematic sound associated with it, an instrument that serves to symbolize it for the purposes of evocation.  Consider last year's score for Amelie.  A frothy concoction of a movie and score, every aspect of production design needed to seep the essence of Paris out of its pores.  Visually, the most recognized areas were visited and heightened through the use of a hyper-real color palate.  In order to balance the production aurally, the sound of the accordion was allowed to permeate every scene, adding a feeling of decadent love to the proceedings.  Whether it be the brass band for England, the didgeridoo for Australia, or the sitar for all things Indian and often Middle Eastern as well, we have coded sounds onto geography for instantly recognizable access.

So if you were making a movie about post-WWII Vienna, what instrument would you use?  The violin?  The piano?  No, you would use the zither.

The Third Man, one of the greatest of all film noirs, has a palatable sense of place.  The bombed-out buildings, cracked streets, and decaying facades are a character equal to the enigmatic Harry Lime.  Visually the production is laced with a feeling of dread, with a darkness born of a particular moment in history.  Yet, Vienna is a city of dreams and even in its post-apocalyptic state, there is a certain nostalgia for the grandeur that once was.  It is to this instinct the score was directed.  While viewers absorbed the oppressive scenes, the music crept into the backs of their minds reminding them of what was lost.  A startling juxtaposition to be sure, but one so successful that Anton Karas's score is still considered a hallmark of film music composition, even more than fifty years later.

The music is performed exclusively on a zither, a stringed instrument on which the strings run the length of the body, which acts as the primary resonator.  Think of an autoharp or dulcimer and you will have the idea.  In adopting this Austrian instrument as the basis of the score, Karas appropriated its music as well.  Two main themes run throughout, the first of which is introduced in the second cue, "The Harry Lime Theme."  This jaunty tune is in a square four with a bass line alternating between tonic and dominant.  Musically it is quite simple, a series of variations on a theme, but its nostalgic sentimentality lends it a charm that one carries outside the viewing.  The second main theme is, fittingly for the city of Johann Strauss, Jr., a waltz.  Introduced in the fourth cue, "The Café Mozart Waltz," the lilting melody is even more ironic in context than "The Harry Lime Theme."

These two themes, or more specifically their styles, dominate the short cues of the CD, all the way to short waltzes such as "Danube Dreams."  Although it may sound uninteresting, the score is anything but and has been a perennial bestseller since the late 1940s.  No film score collection would be truly complete without this gem.

The main question, then, is if this new recording of the score is worth purchasing or if you should go with another.  One of the strangest features of this CD is a hold-over from the 50th Anniversary release of a few years ago.  Interspersed between the music cues are snippets of dialogue from the movie.  While they do provide a hint of the juxtaposition inherent to the score's success, I would suggest purchasing the wonderful transfer of the movie released by the Criterion Collection for the full experience.  Here it merely serves as distraction.

The sound is uniformly good, with deep, rich bass strings and a brightness to the upper register. Gertrud Huber performs on the zither with panache and sensitivity.  Also, orchestral versions of the two main themes performed by the City of Prague Philharmonic Orchestra conducted by Nic Raine are added on to the end to entice you further.  Yet, if you are satisfied with your current recording I would suggest you stay with it.  If, however, you have never experienced the film or score, then by all means you owe it to yourself to find out what the fuss is about.