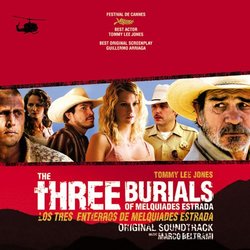 The Three Burials of Melquiades Estrada

I\'ve called Marco Beltrami a "promising" composer for a while. But how long do you promise before you deliver?

Marcos Beltrami has enjoyed a decade of solid work doing a steady stream of horror movies, action films and things in between for a loyal group of collaborators (Wes Craven, Alex Proyas and Guillermo Del Toro). He\'s never wavered in his diligence but it has never felt like anyone allowed him to truly stretch his wings. So it was a delightful surprise when Tommy Lee Jones picked him for his directorial debut.  And in breaking out of his mold, Belrami has written his best score yet.

The Three Burial of Melquiades Estrada is a modern Western combining the non-linear elements of screenwriter Guillermo Arriaga\'s other scripts with the dry gallows humor that one would expect from Jones. Like a synthesis of Sam Peckinpah and Robert Altman, the story resides on the Texas/Mexico border, treating it less like the edge of two separate countries, but one unique domain of its own.

Beltrami gives a sense of the place through ethnic ensemble with emphasis on Central American influences. He uses a small string section, accordion, log drum, pan pipe and a guitarron. The score is either the state of and nostalgic sadness or dangerous stillness, like a rattlesnake waiting to strike.  The more stringy emotional tracks ("Cinco Anos") are countered by the more percussive suspense pieces ("Fleeing Illegals", "Shoot Me"). It\'s a very minimal score, full of short cues and rarely gets big, conserving them for choice moments ("Gift Horse", "No Jimenez"). Even the climax ("Good Bye") is simple, expressing a release rather than resolution.

The score is a short one (about half of the album) and the other half of the album is filled with country music. Jones acted as music supervisor, maintaining the right tone by hand picking out the pieces peppered throughout the album. There\'s some Merle Haggard ("Workin\' Man Blues"), Hank Williams Jr. ("The Cheatin\' Hotel"), Bobby Flores ("I Wonder Who\'ll Turn Out The Light "), and Dwight Yoakam ("Fair to Midland") who co-stars in the movie.

Despite being a Texan myself, I\'ve never been a big country lover (just not in my genes), but it is a solid collection. By his own accord, Beltrami calls his work here "an experiment." It\'s a totally successful one, suggesting further flowering of his skills. I\'m excited for what is to follow.