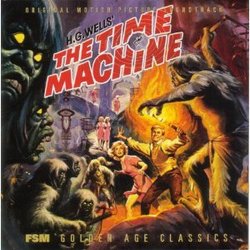 The 1960 George Pal produced science fiction film, The Time Machine, could be considered as much of a classic as its H.G. Wells penned literary source of the same name.It still entertains today due to the engaging performance of Rod Taylor as the scientist George, the ambitious scope and sense of discovery and the inclusion of genuinely emotional relationships presented in the film.The hugely memorable score is by Russell Garcia, who also collaborated with Pal the very next year on Atlantis: The Lost Continent, to equally great effect musically.This is the first time the original score tracks have been preserved on disc, including the special sound effects Garcia himself produced and integrated into the recording.

The "Main Title" begins with a brief, sweeping statement of the main theme before being absorbed into the sounds of various ticking clocks and ringing bells, which in turn are overtaken by furious, staccato action music.The main theme returns in full force, a theme with a fair amount of longing to represent the George's desperate attempt to reclaim his lost love and search for a better life in the future.Also heard is a warm, comforting new theme on oboe, closing out the last minute, representing the friendship between George and his pal, Filby.

"Terror / All The Time In The World" opens first in a fury, but then quickly drops into descending, mysterious textures provided by chimes, vibes, tremolo strings and harp, while the main theme appears in oboe and then mid-range string voices.A marching snare beat punctuated by muted trumpet starts "A Sick World / Warm Friends", which then moves into a saddened string statement of the main theme, brightening slightly into an appearance of the George/Filby friendship theme.  Another dramatic burst of portentousness opens "The Time Machine / People Scurry", where we also hear an arcing horn motif for the machine and its travels through time.An impassioned version of the main theme then plays above pulsing brass and woodwinds, all while covering George’s extensive journey.This section is followed by harp glissandos, sound FX and jaunty music sped up to represent the changing fashions we see in a store window over time.

A lovely pastoral theme is subtly presented by oboe above more sound FX in "Beautiful Forest / Fear", but is then interrupted by bold, rising brass chords representing the far-flung future in which George has arrived, populated by a docile race of humans.The second half increases in pace and tension through an insistent string ostinato, fluttering flutes and angry horns. This energy continues into "Rescue", further supplemented by timpani, xylophones and a halting, churning chase motif.A respite is found in "Weena", where the main theme rises again to the fore in softly sweet tones to underscore a new love interest George has discovered among cattle-like breed of post humans.

In "Trapped In The Future / Night Scare", brittle solo piano notes lead into threatening low bass string strings and horns to herald an sneak attack by the cruel, cannibalistic race of Morlocks.The mood is calmed by a wistful version of the friendship theme in "Reminiscing" and by a upper-range, earnest version of the main theme in "The Time Traveler".However, the Morlock threat rears its ugly head again in the lengthy, climactic track "Morlocks / Fight / Escape".Ominous rolling progressions in the low strings and brass set the stage for an inevitable showdown.These menacing rolling notes slowly increase in tempo until the music explodes into raucous action, utilizing the halting motif heard previously in "Rescue" as well as racing strings, clamoring timpani, and staccato trumpets.A new, aggressive and furious thematic idea appears for the "Escape" portion, with brass harmonic intervals entrenched in the Stravinskian mode and buried within it are brief declarations of the main theme."Love and Time Return" brings the score back home first with a strident presentation of the main theme amid tense, escalating strings, brass stingers and more furious action material.

The score closes appropriately with the "End Title", starting with a subdued rendition of the main theme, which melds into the friendship theme for a rousing finish.Also included in this wonderful release from Film Score Monthly is a 7.5-minute of outtakes from the score, featuring alternates for the main title, the chimes/vibes/harp tones in "All The Time In The World", the goofy, jaunty music which had been sped-up for use in the film to show time elapsed in a store front but is now heard at the correct speed, the pastoral oboe theme from "Beautiful Forest" and the threatening "Night Scare".I actually did not detect too many differences from the previous versions of these cues, but it still makes for an interesting suite of material from the film, acting almost as an extension to the “End Title”.This is a great release for fans of the film, score and the composer, all in fantastic stereo.