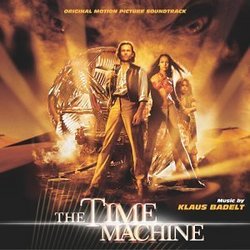 There is something about remaking a science-fiction classic that seems to piss everyone off.  While most people didn't seem too excited for Simon Wells' "re-imagining" of his great-grandfather's story, the film wasn't intended to replace the classic 1960 film - but rather, stand alongside it.  While film was critically panned, a surprisingly noteworthy factor was that of composer Klaus Badelt's grand orchestral score.  The Time Machine is his first "major" Hollywood film, and Badelt rose to the challenge and delivered a score that seems quite "outside the box" compared to what one might expect coming from Media Ventures.

Having been a fan of the music coming from Media Ventures for a very long time, I was really looking forward to this score.  Until this point, Badelt's work had been collaborative - providing "additional score" on two films, Extreme Days and The Pledge.  As a result, I was somewhat skeptical about this score, but three minutes into the film, my fears were put to rest.  Badelt starts the score off with "Professor Alexander Hartdegen", which introduces us to Guy Pearce's character, as well as the main title theme.  This main theme shows up throughout the CD in many different forms.  Interestingly enough, as Pearce's character travels through time, the main theme changes to reflect the time period he is in.  At the beginning of the film, the theme is first heard in traditional orchestral form, yet by the end of the film ("Godspeed"), it has acquired the ethnic woodwind sounds of the Eloi people.  It's a nice touch, and sounds great.  A solo piano rendition of the theme can be heard on "The Master", and is performed quite beautifully.

The futuristic-yet-primal Eloi people are musically represented on the middle of the album, tracks eight through fifteen.  A powerful woodwind section with chorus and tribal rhythms, Badelt manages to capture the innocence and beauty of their culture through a happy theme that is tinged with sadness.  In "Morlocks Attack", Badelt breaks out the big orchestral action that the film demanded.  Full of ethnic orchestral elements and percussion, the track is a real go-getter from start to finish and showcases Badelt's composing ability.  This fun track also combines the main theme from the film with a choir, creating a stunning combination.  Finally, "Godspeed" wraps up all the themes as they have progressed and evolved throughout the film.  It is a great track that highlights the best parts of the album and the score.

It is hard to say anything negative about this album.  Varese Sarabande has done a bang-up job with the production of this disc.  The sound quality is great, and with a running time just shy of 60-minutes, the album serves as a very good representation of Badelt's score, and his abilities as a composer.  I for one cannot wait to hear what he does with his next score, K-19: The Widowmaker.

Should you get this album?  Well, if you enjoy strong versatile theme and good action music, then I would most certainly say yes!  I always love it when the composers from Media Ventures set out on their own.  Composers like Jeff Rona, Harry Gregson-Williams and John Powell have created great names for themselves in Hollywood, and Badelt is coming up next. The Time Machine CD is definitely a soundtrack gem for 2002, and I expect it to be a well-discussed score for years to come.