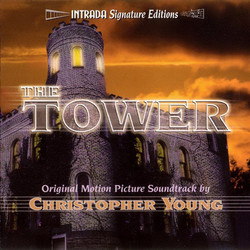 What an unexpected delight Christopher Young's score for his nephew's movie The Tower is, and how wonderful that Intrada Records released it. But before getting to a description of the score, let me back up a bit and provide a little background.

Intrada Records launched a new series this past spring. Labeled "Signature Editions," each release in this series is a score for a lower budget movie composed by a recognized and established film composer. Isn't that one of the best ideas you have heard in quite some time? Doesn't it quicken your pulse just a little? Most scores that find a release are for pictures backed by a major studio. They have the money for marketing a film and see the score as another facet of their marketing campaign. As a result, many times composers are given suggestions about their score from the director or the producer and many compromises have to be made, often with second and even third composers being brought in at the midnight hour to partially or completely re-score a picture. Sure, fantastic scores are still produced, but have you ever wondered what your favorite composer would sound like if given the freedom of a small budgeted picture, the freedom to explore? That's precisely the idea behind the "Signature Editions," and it is a good idea indeed.

The first release in this new series was Christopher Young's The Tower. The movie was a small independent film by Young's nephew Gedney Webb that was released in 2002 and was nothing more than a romantic ghost story set on the shores of Lake Michigan. Although Young is certainly an expert at sweeping orchestral drama, for this film he was forced to keep it simple. The instrumentation consists primarily of a few select strings, piano, harp, and well-placed electronics. The resulting sound is raw because you hear every string, every harp pluck, and there is a great degree of openness and simplicity to the sound. But within that simplicity, Young was able to develop musical ideas in ways not possible in modern studio pictures.

Each track is long by any standards. The entire CD lasts around forty minutes and there are only five tracks. The first four are named "Amour De Fantome," which literally means "love of a ghost." These tracks are fittingly elegiac; the first one begins so slowly and softly that at first you will probably turn up your stereo to hear anything at all. It slowly grows across its seven and a half minutes until the piano enters with a somber melody over arpeggiating chords. The next parts continue this growth toward full orchestration. Once a melody is introduced it is allowed to develop before something else joins in. The overall progression of the score is extremely organic and natural, with a steady and inevitable pace. Along the way, Young throws in interesting harmonic twists and sends the score off in a new direction. For instance, around the four minute mark of "Amour De Fantome Pt. 2," the violins slide up the interval of a second and then right back down. It is a creepy dissonance coming in the middle of such slow and steady melodic growth and signals something new is about to happen.

All of this forward musical motion climaxes in the last track, "Coeur Hante," or "Haunted Heart." Young increases the tempo (almost doubling it in some cases) of the melody, turns from minor to major, from dark to light, from somber to lilting. It is an effective move because he had spent so much time leading the audience to this resolution. It is one of the most best instances of catharsis I have experienced in a score this year.

Is The Tower a perfect score? By no means. It is slow in some instances and Young seems overly in love with some themes, repeating them when he could be progressing his ideas and showing us something new, thus keeping our attention. But it is an effective score and one that I'm glad has seen the light of day. With a limited run of 1,000 copies, Intrada was hedging their bets on this release, and it paid off in spades! The inclusion of a 2-CD promo for The Core certainly helped (look for a review of that album soon), and when you get two limited scores for $19.99, you can't really fault Intrada for blowing through their inventory so quickly. In fact, their second release, The Shade, has already sold out - and it's not being released for another month! Unfortunately, that makes it hard for anyone to get it - Intrada needs to figure out a way to put out a limited run that is not so limiting. So keep an eye on their website, and get a jump on the ball the next time they make an announcement.