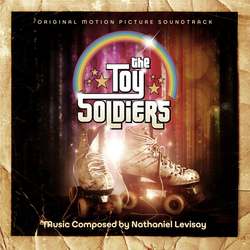 Howlin' Wolf Records is proud to release Nathaniel Levisay's score for The Toy Soldiers, a score reflective in nature accentuating both light and dark with a glimmer of hope.

The Toy Soldiers takes place in the 1980's and focuses on a group of teenagers whose stories intertwine and meet with tragedy. The film is told in a non-linear fashion, which allows Levisay an opportunity to get deep within the tumultuous culture of teenage sex and drugs. Rather than simply focusing on individual characters, he takes the listener on a musical journey creating a sonic soundscape that is engaging, harrowing, and at times hopeful. Rounding out the soundtrack are songs by Daily Bread and Gliss.

Fans of Levisay will be equally delighted to know that early orders will ship with an additional booklet autographed by the composer. The CD is beautifully packaged in a jewel case with a 12-page booklet with art direction by Luis M. Rojas, a note from writer/director Erik Peter Carlson, and liner notes by Zach Tow.