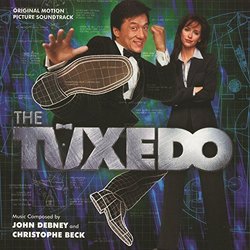 In The Tuxedo, Jimmy Tong (Jackie Chan) is a cab driver who gets recruited to become super-spy Clark Devlin's (Jason Isaacs) personal driver.  After an accident that incapacitates Devlin, Tong assumes his identity, and by wearing his super-tuxedo, takes on all the skills and abilities of a secret agent.  Teamed up with Delilah Blaine (Jennifer Love Hewitt), they try to uncover an evil plot to destroy the planet's fresh-water supply.  Scored by Christophe Beck, the film required John Debney to come in and add his own brand of spy-tech to the music track.  The resulting soundtrack sounds a tad bi-polar, but has a few entertaining moments that might be worth a listen.

Debney does more of the same stuff he's done in Spy Kids and Jimmy Neutron - hard hitting rhythms with plenty of brass and orchestral mayhem.  "Mad Bike Messenger" is a representative track of the kind of fun score Debney gives us.  On the flip side, we have Christophe Beck's work, which isn't as hard-hitting, but has more of a dramatic, almost "wondrous" edge.  "First Mission" is sneaky and foreboding, but his action cues ("Demolition", "Superhuman") have a slightly more techno-edge to them than Debney's action cues.  It's interesting to compare the two parallel scores; we're even given two versions of "Rope Fight".

Capped off with a James Brown song from the film, the album runs a rather tight 36-minutes in length.  It's a solid listen, but after a while, the electronic beats get to be a bit much.  Debney and Beck fans will find this one a "must have", but others might want to pass.