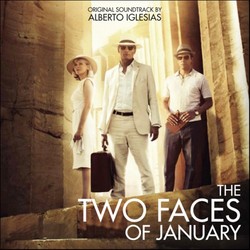 The Two Faces of January

Luscious new film score by Alberto Iglesias for the adaptation of the popular novel. Recorded at Air Studios in London, under the composer's baton, Iglesias provides a top-notch lyrical, dark and romantic thriller score with intense Herrmannesque touches. A very classy and highly emotional soundtrack that seems written in the old good times.