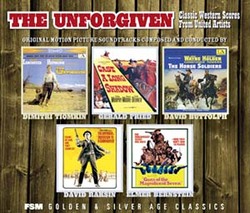 May I first say that my favourite film genre is the western, and my favourite period of film composing is the Silver Age. So I looked forward to listening to this intriguing collection with great anticipation. It’s very much a Curate’s Egg; and having listened to it through three times now, some very definite conclusions have formed in my mind. Firstly, the Hollywood Western truly belongs to Elmer Bernstein; The Unforgiven is a late–period Tiomkin gem; David Raksin is a composer who never ceases to impress, Gerald Fried, increasingly, is; and The Horse Soldiers is a musical comedy (at least on the evidence of the music here).

The Western gives a composer a great palette on which to paint. The stories and themes explored can be universal – it’s no wonder that westerns can be remade in almost any other style (eg High Noon into Outland). The typical Hollywood western sound is by and large an artificial construct of the eastern European émigré’s who dominated the first three decades of sound cinema (In much the same way, they created the biblical epic sound). The music of the Hollywood Western came to typify an open-range, pioneering, very Copland-esque sound. This sound was universally accepted and was creatively enlarged upon over the years. Ennio Morricone’s revisionist sound is no less valid than, say Bernstein’s, just a different take on a period that musically we have little archival knowledge, apart from folk tunes and Native American music.

The five scores presented here cross the Golden/Silver Age divide with scores between 1959 – 1969 and represent works by composers who themselves traversed that very definite sea-change (By God, Bernstein worked with Cecil B De Mille and Martin Scorsese!).

First up is Dimitri Tiomkin’s score to John Huston’s The Unforgiven (1960). The score as presented here is very much Western-as-soap-opera. Nothing wrong with that - Jerome Moross’ The Big Country is in my opinion one the greatest Western scores ever composed. Tiomkin, hardly a novice to western scores, and one of the aforementioned pioneers of the established Western sound has written a full blooded, romantic score, with a beautiful, recurring motif, for ( I assume) Audrey Hepburn’s character. This lush theme is developed and presented in many guises from hesitant to unbridled romanticism. There are of course many of Tiomkin’s typically intricate staccato flourishes. The Indian attack music is a little stereotypical, but nothing out of ordinary for the time. There is perhaps an over-reliance on Mickey Mousing, and I couldn’t shake the notion that I was listening to a Carl Stalling score in some passages, but overall this is a robust, romantic romp of a score with enough thematic material to reward repeated listening. The sound quality is superb also.

Cast a Long Shadow (1959) is an Audie Murphy western directed by Thomas Carr. I haven’t seen it, but scouring for information about the film, apparently it’s not up there with his better efforts. Make of that what you will. My knowledge of Gerald Fried is admittedly limited to his TV scores, where I had him pegged as a journeyman composer – adequate but uninspiring. I realise this is all subjective, but on the evidence o f the score here, my opinion hasn’t changed. The "Main Title / Chip’s Introduction" gave me hope initially. It’s a heroic, rambunctious cue, amusing, lively and exciting, with a wide, open-range feel, nicely orchestrated, and feeling more contemporary than its 48 year old vintage would indicate. However the score quickly degenerates into musical filler. There’s just nothing to really engage the listener. Worse still, its as if Fried were already in TV movie mode – the score has a very superficial feel, as if it was composed on the spot with no real insight. I don’t want to go on and on in a negative diatribe, suffice to say after I had listened to the whole box set through I couldn’t recall a single note of Cast a Long Shadow, it wasn’t bad, just... adequate and uninspiring. The sound however is very good, the mastering here outstanding.

The Horse Soldiers, a John Ford film, again from 1959. John Wayne, William Holden, the cavalry. Believe me this score is not what you’d be expecting. Dull it ain’t. What is presented here is a kind of Greatest Hits of the Civil War. The first thing that hits you immediately is that David Buttolph is a world class orchestrator, he imbues such irony free standards as Dixie with a right-between-the eyes panache that is simply irresistible. I defy anyone to listen to "I left My Love" and not start tapping your feet about halfway in. What underscore there is leaves you wanting more, and he does manage to utilise some of the familiar marches to good dramatic use – "When Johnny Comes Marching Home" is presented (it would appear) as a time-passing montage. There are some quiet moments amongst the jingoism, Deep River is a welcome romantic interlude, as is "By the Campfire", but its soon back to the songs, some of which are somewhat suspect - "Tenting Tonight" anyone? I wouldn’t imagine this would make anyone’s top ten Western scores, but it really does put a smile on your face, and this is mainly due to Buttolph’s fantastic way with a cavalry standard. Its no surprise this is the man who composed F-Troop!

My attention immediately shifted up a gear after the opening bars to David Raksin’s "Main Title" to Invitation to a Gunfighter. This track alone is an instantly classic memorable theme containing some very interesting instrumentation. Raksin develops the four-note motif established in this theme very satisfactorily as he progresses. This score differs from the rest here in many ways, not least in the fact that rather than comment objectively to the action, he tends to go for inner motivation , achieving a more intimate feel than a lot of Westerns, and reflecting the move toward psychological Westerns, or certainly more character motivated fare. The orchestration is sparse, possibly reflecting the size of the orchestra at his disposal, but he works wonders within his limitations. This is a multi-layered, highly detailed work, but also cohesive, thematically memorable, and ultimately very satisfying. It’s is similar in tone to his own Will Penny (1967), another smaller scale, subdued western, and also to David Rose’s Hombre (1966), all achieving a melancholic, man-out-of time romanticism that works very effectively. Invitation to the Gunfighter is the real gem in this set and deserves your attention. The sound is fine, although I detected some ambient noise not quite quelled here and there.

And so to Guns of the Magnificent Seven (1969), the third entry in the series, and a fairly redundant entry at that. Elmer Bernstein returned to duty and delivers what’s required, although thematically he hardly stretches himself, basically cutting and pasting the cues we all know and love into the action in a fairly random fashion. Its no less exciting to listen to, the new orchestrations here are vibrant and pacy, even though it does sound like they’ve added reverb to make the orchestra sound bigger than it actually is. It’s fairly cynical that themes developed for certain characters, such as Eli Wallach, in the original are repeated here. But ultimately, it’s churlish to complain as these themes are always welcome to listen to and really exemplify the pinnacle of Hollywood Western scoring.

As a snapshot of the state of western soundtracks from 1959 to 1969 I would hardly rate the five here as being particularly representative of the best that was produced, but we should all be grateful that we are at least able to listen to such scores, the Raksin especially, that may have forever slipped between the cracks. Its hard to accurately rate this box set a whole, given that the quality of the music is so wide, but I would have to give it a solid 6/10 in general and 9/10 for the Raksin alone.