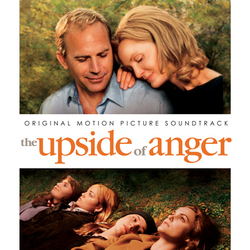 The Upside of Anger

Review: Upside of Anger, The

Regular readers of my reviews will surely have seen that I was reviewing Alexandre Desplat's newest score for an American movie, groaned inwardedly, and then resigned themselves to the fact that I would spend half the review extolling the virtues of this rising film score star. Yes, it is true that with both Girl with a Pearl Earring and Birth, I spent a large amount of time introducing Desplat to American audiences. But after the success of those two scores, I think people are beginning to recognize this distinctive talent and I feel free to move on directly to the music.

Unfortunately, that music is his score for Upside to Anger. The reason I use the word "unfortunately," is that overall, I don't find the work up to the level of Desplat's previous efforts. Is the music beautiful? Yes. Is it well crafted? Of course. But does it take me somewhere new, like Girl with a Pearl Earring did, or present interesting contrasts in color and tone, like Birth? I'm afraid it does not. Desplat seems to be treading water with this score, a surprising fact given that the movie is so full of interesting dramatic moments that he could have invested with great interest. The only time I found Desplat to be reaching out and engaging his audience was in the longest cue, the "Epilogue." In that one cue, which accompanies the movie's most surprising developments, the composer connected all his soundscapes and melodies with such success that I felt I was back in the hands of a master.

But I get ahead of myself. The Upside of Anger is composed of many short cues primarily in the same tonal family ornamenting the same melody. In that way it resembles Girl with a Pearl Earring, with its harp, string, and piano ensemble presenting one melody in several guises. The main title, "The Upside of Anger," is an example of how the rest of the score sounds. It opens with piano, then celeste, and finally the strings presenting the pentatonic main melody. Underneath this melody flows harp arpeggios and interesting harmonic turns. One of the things I've always admired about Desplat's writing is its depth; you have to listen into his music's texture to fully hear it as there is so much going on under the surface.

Most of the other cues resemble "The Upside of Anger." They are wonderfully rich and beautiful, but I kept wanting a little more. There are a few delightful moments of comedy, such as the charming "Denny's Not in the Mood," which really made me want to hear what Desplat would do with an American comedy. The writing is light, fast, full of pizzicato and none of the obvious gestures common in comedy writing. But we all know that once composers are pigeonholed, they rarely get out of that genre and so far Desplat has been Oscar bait.

So can I recommend The Upside of Anger? Yes, but it is a qualified endorsement. The score is beautiful and more carefully crafted with more going on in the music than most Hollywood scores. It is enjoyable to hear and makes a pleasant way to pass the time. But it isn't groundbreaking or new and might not keep your interest the whole way through. Still, it does make me wonder what Desplat will do next.

Editor's Note : The soundtrack has been released as an iTunes exclusive, and can be purchased (and sampled) by clicking the iTunes Store link to the left.