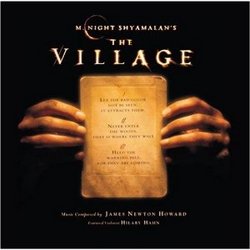 Over the past few years I have begun to anticipate each new James Newton Howard score written for an M. Night Shyamalan film with something approaching glee. Howard's scores for those films are consistently among his best and I remember touches from each one – the evocative use of undulating breathing in The Sixth Sense, the seemingly incongruous techno beat that perfectly complemented David's discovery of his powers in Unbreakable, the simple and powerful shift of a minor ostinato to major at the moment of revelation in Signs. Howard and Shyamalan represent one of the most successful director/composer pairings working today.

The Village continues this streak. I have come to believe that there are two reasons these scores work so well. First, Shyamalan seems to have a keen musical sense when it comes to his movies. The atmosphere in each has been deliberately chosen and the music matched to augment the desired mood. Since The Village is a fairy tale period piece, the score is full of classical gestures such as Paganini-like obbligatos. To supply those obbligatos, as well as the beautiful main theme, Howard turned to Hilary Hahn, a rising young violinist who coaxes a bright and sweet tone from the violin. Her presence marks this recording and adds a depth and character often lacking in score recordings. The violin and its double dominate the score's soundscape, but Howard also rounded out the ensemble with open flutes and horns backed by strings and percussion. These instruments have the notable capacity of shifting from innocent to ominous in a few heartbeats, a useful trait in The Village. For example, listen to "Bad Color." The four-minute cue begins with flutes pitch bending in an aleatoric manner underscored by chimes and rattling percussion that is quickly replaced by a sinister burst of violin arpeggios that leads to a delicate statement of the main ostinato/theme. But in the cue's final minute, the violin plays a rapturous solo passage that is heartbreaking in its beauty. This instrumental duality is necessary for the film to work and Howard matches the atmosphere wonderfully.

The second reason has to do with the pacing of Shyamalan's movies. In a day and age when it seems as though movies are cut every seven seconds, it is a pleasant change to watch a movie where camera movement builds tension. Befitting the languid plotting, Howard's deft and delicate score has room to grow and develop. Instead of simply plugging in a character's theme whenever he or she appears on screen, Howard is able to let the music grow and change with the movie's character arch. He is allowed long, full cues that shift and develop, enriching the film instead of merely accompanying it. This style makes for interesting listen that may not please on the first hearing, but given time yields new and fresh insights.

In The Village, Howard juxtaposes the romance and the horror evident onscreen both between cues and within the music’s structure. The overture, "Noah Visits," is a perfect example. It presents what I have been calling the main ostinato/theme for the first time. It is a term I have deliberately chosen as it represents what I have found to be a common feature in Howard's scores. He often sets up a repeating pattern that can serve as a theme while being easily and successfully developed. It allows for a great deal of compositional flexibility. In "Noah Visits," the violin enters with a soaring, expressive line that is replaced halfway with the full ensemble playing the ostinato/theme. It is a deceptively simple ostinato/theme, centered on the score’s A-flat tonality, a suitably dark-tinged major key. The theme, which appears in some form in most of the cues, is a simply walk up and down between the seventh and fourth scale steps that outlines a tritone. The tritone, or "devil’s interval," is an extraordinarily dissonant construct that can resolve any number of ways, changing its color with its surroundings. This allows him to use the ostinato/theme in a number of situations, from dark to light, always in service to the movie, always in perfect juxtaposition.

One final word: I have long complained about cue titles on scores giving away too much about a movie's plot points. This practice is especially irksome in regards to movies like Shyamalan's where final revelations can make or break the movie. For The Village, the titles are specific enough to allow for recognition among those who have seen the movie, but are general enough that they would not unintentionally ruin any surprises. Bravo, Hollywood Records.

The Village is a rare score. It is mournful, surprising, delightful, balanced. And I challenge you to find a cue is more wrenchingly beautiful than "Gravel Road." It is just the right mix of darkness and light, wonderfully summarizing the movie’s themes. Given all of this, isn't it time you visited The Village?