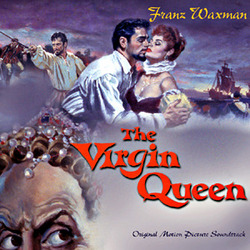 Here is the first release ever of music from Franz Waxman's score for the 1955 Bette Davis film The Virgin Queen. Any day that introduces a new Franz Waxman release is a great day indeed!

Here, Davis reprises her role as Elizabeth I from her previous portrayal in 1939's The Private Lives of Elizabeth and Essex, which featured a landmark score by the great Erich Wolfgang Korngold.

Waxman's portrait of regal nobility comes complete with the period's obligatory pomp and circumstance, and it is all treated to the composer's customary penchant for re-invention. It's both stirring and contemplative... it's an incisive symphonic depiction of one of the most written about periods in England's history. Elicit love affairs, sword fights, sea battles... Franz Waxman's The Virgin Queen is great film music and is, after nearly fifty years, now available!