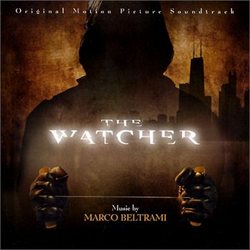 The Watcher was an interesting film about a former FBI Agent (James Spader) who is asked to help catch the serial killer (Keanu Reeves) that killed his family. This was an interesting film in that we already knew who the killer was - the protagonists just didn't know. Since were no real clues, it was just a matter of timing for them to catch him. It had a rather silly (and unfulfilling) ending, but the one thing that really did stand out of the film was Marco Beltrami's driving techno-rhythmic orchestral score.

Beginning with "Driven", a cue that accompanies the jerky, blurry, strobing opening titles chase, the score starts out with an ominous theme with an underlying rhythmic groove. Soon a female soloist comes in, and the orchestra starts to pick up the pace. Soon it becomes an interesting mixture that, while it seems to be inspired by a mixture of Howard Shore, Elliot Goldenthal, and Hans Zimmer, is actually pure Beltrami.

"Big For The Shrink" is a calm somber moment focusing on piano and flute, and is one of a few of the simpler, reflective moments in the film and score. Some moments in the score hearken back to his previous work on the Scream films, especially a moment in "Grif Gets A Girl". But it works in the film, and given the limited time to write the score, it's still acceptable (and enjoyable).

There is a lot of techno-rhythmic grooving going on in the score, and it creates an interesting mix between orchestral and electronic music. Fully orchestral cues like "Face Down" tend to underscore the more emotional moments in the film, while a majority of the techno-esque cues have a great driving rhythm beneath them, which adds to the excitement level.

I've always been a sucker for choral music, and Marco's inclusion of a female soloist in selected cues is right up my alley. There's just something about a driving orchestra with a techno rhythm and a wailing female voice that just seems great. An interesting note about the album is that there is a 15-minute gap of silence that ends with a "wah wah wah" silly horn gag. Running 45 minutes long (not counting the 15-minute gap), this album is quite fun and while it might not be the best score Beltrami has done, it's certainly a good album to buy.