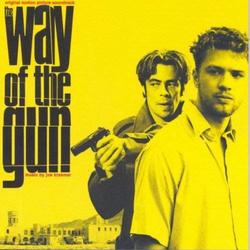 The Way of the Gun

Review: Way of the Gun, The

Writer Christopher McQuarrie won an Academy Award for his screenplay to The Usual Suspects. Surprisingly, he then lay dormant for a few years - even though he was in demand. Most likely ghostwriting and polishing screenplays, he finally got back in the act with his work on X-Men. Due to some last minute issues, though, he and co-writer Ed Solomon removed their names from the film (before it made $50 million opening weekend). In the midst of all of that, though, it seems that he made a film. The Way of the Gun is a gritty thriller about two men (Benicio Del Toro and Ryan Phillipe) who decide to kidnap a surrogate mother (Juliette Lewis) and hold her for ransom expecting money from the rich parents of the unborn baby. The dark percussive score was written by Joe Kraemer, who hadn't scored much before except for an indie that premiered at Slamdance, Burn.

Kraemer's score starts off with a guitar strum, followed by pounding timpani - this is indeed going to be a grungy film. As the main title progresses, a bass line begins, and is slowly built upon by the strings and percussion. It reminds me of the way Goldsmith would occasionally write music, and that is the first of many composer nods that seem to flood the score.

There are plenty of dark cues in this score. "The Grab" is a somber cue that slowly builds with the percussion getting louder and louder. It is a pattern that happens throughout the score, and works relatively well. There is plenty of action going on in the low and high registers in this score - in fact there are a few times where the bass was almost blowing out my speakers! "Enter Bagman" features a long section where the string section is holding a high chord quietly, while a piano softly plays - the recognizable sound of Thomas Newman. It might be homage, or possibly a temp-score remnant. Either way, this theme shows up a few times in the score, and actually does the job just fine.

"The Brothel" is a very dark cue, employing low strings with a dithering piano and suspenseful flares. The timpani strikes up with a harp, and then the piano comes back in with the strings. There's a lot of tension present in this cue, as indicated by the high scrambling of the string section followed by the pizzicato and the low woodwinds and sliding string section. (Dare I suggest it reminded me of some of the darker moments in Williams' score to Raiders of the Lost Ark?)

The "End Titles" cue is a nice recap of the major themes heard in the score, although it's primary focus is the more optimistic theme. A fun little inclusion is the original song "How To Make A Margarita" which Kraemer wrote four years ago. It's quite amusing, and while it doesn't fit in with the rest of the album, it's still a fun listen.

Kramer stated in the liner notes that he and McQuarrie wanted the score to have a ragged quality as found in many of the 1970's scores by Goldsmith, David Shire, Williams, Schifrin, and others. I think he succeeded. The resulting score might not necessarily sound like the most original thing in the world as a result, but it does the job just fine. The album runs a little over one hour long, and is available from Milan Records.