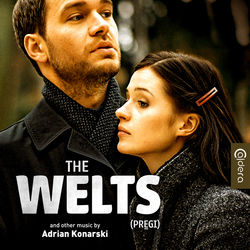 The Welts and Other Music

Caldera Records is proud to present the original score for the motion picture The Welts, composed by Adrian Konarski. Performed by a small orchestra with haunting instrumental solos for piano and woodwinds, the music is full of melancholy and yet offering a glimpse of hope for the troubled character of the movie. Konarski works with several themes and motifs such as a love theme which receives its variations throughout the score.

Furthermore, Caldera presents several other works by Konarski, mounting to a running time of 80 minutes in total: Drowsiness and Obywatel are two other elegiac scores for movies by Magdalena Piekorz, performed by orchestra and soloists such as a mesmerizing soprano. Several other pieces also assembled on this compilation were written by Konarski for different projects, offering a vast variety of melodies and styles.

As a bonus, we included an exclusive audio commentary by the composer where he talks about his work. The 16th CD-release of Caldera Records features a detailed booklet-text by Gergely Hubai and elegant artwork by Luis Miguel Rojas. The CD was produced by Stephan Eicke and John Elborg.