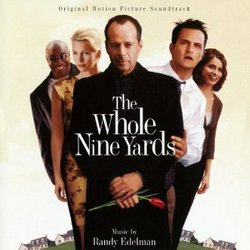 The Whole Nine Yards was a rather amusing film about a contract killer (Bruce Willis) who moves in next door to a dentist (Matthew Perry). Plenty of double-crossing hijinx ensue when the Hungarian mobster (Kevin Pollak) that Willis crossed tries to have him killed. Overall it was a fast-paced enjoyable comedy that just happened to have a great jazzy score by Randy Edelman in addition to a few great songs.

There are a few classic jazz tunes in the film, including Charles Mingus' "Moanin'" and the highly enjoyable (and worthy of listening to a few times) "Every Time I Hear That Mellow Saxophone". Also included on the album are two songs by The Charlie Biddle Trio featuring Stephanie Biddle. They appeared "live" in the film, and I found their performances to be quite refreshing and pleasing to listen to. It was unconventional, but the entire end credits rolled over their performance of "They All Laughed". One other song worth mentioning is the very jazzy "Tenth Avenue Tango", which features Bruce Willis himself (on harmonica).

Edelman's score contains plenty of jazzy elements itself, which is why the songs and score seem to blend so perfectly into the film. He made some great thematic choices as well. The bulk of the film takes place in Montreal - there is a bit of a French-Canadian (well, French) flare to some of the cues, such as the second half of "Jimmy the Tulip" which features (of all things) an accordion. "The Gogolak Mansion" and "Yanni on a String" feature a very dark Eastern European motif. For the most part, though, the film's main jazz theme represents the Chicago hit man, and works well in the film. It keeps the pace up-tempo, and it adds to the sheer fun of it all.

Running a hearty 56 minutes long, this album was a blast to listen to. The film was fun, and if you didn't get a chance to see it, I would have to recommend it. Afterwards, be sure to get the album - I don't think you'll regret it.