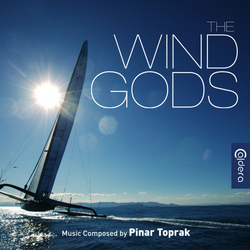 The Wind Gods features the magnum opus by its composer Pinar Toprak. The Turkish-born musician delivered a grand, sweeping and epic score which shows how exciting the music for a documentary can be: filled with several memorable themes, a detailed orchestration and a lot of swashbuckling action, the music brims with masculine forces and female sensibilities.

Recorded with the 70+ piece Hollywood Studio Symphony conducted by Jerome Leroy, The Wind Gods is a vivid, thematic and diverse score worthy of the biggest Hollywood epics. As a bonus, we included an exclusive audio commentary by the composer where she talks about his work. The twelfth CD-release of Caldera Records features a detailed booklet-text by Gergely Hubai and elegant artwork by Luis Miguel Rojas. The CD was produced by Stephan Eicke and John Elborg.