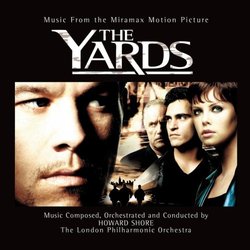 The Yards is the dramatic film about Leo Handler (Mark Wahlberg), a man who returns home from serving jail time that he got by taking the fall for his friends. Wanting to start anew, he works at his uncle's business - which turns out to be the type of thing that might just toss him back in jail. Critically acclaimed, The Yards contains a moving score by Howard Shore.

Beginning with "Blackout" (which contains excerpts from Holst's "Saturn" from "The Planets"), Shore conducts the London Philharmonic Orchestra in a moving lyrical work. The first main theme we hear of Shore's comes in "Queensborough Hall", a Puccini-styled piece that takes advantage of a solo clarinet with soft orchestral support. The other main theme we hear in the film is classic Shore - a full orchestra full of restrained dramatic power that has its momentary flourishes, and then stretches of minimalist somber tones that could easily have been used in a Cronenberg film.

"Willie" is a rather powerful piece full of emotion and drama, and "Yardmaster" is a tense piece that builds yet never actually climaxes. The score is overall dark and solemn, but towards the end of the film, it starts to take on a slightly more upbeat tone - while still retaining the darkness. "Willie's Tears" is such an example. The last cue on the album, "Internal Investigation" is a nice cue that wraps up the score by recapping many of the themes heard in the score, ending in a triumphant finale.

This is a rather elegant score that Shore has written, and many of the cues stand as a testament to his long-standing ability to score in almost any style. Running almost 40-minutes long, The Yards is an excellent work by Shore, and definitely worth adding to your soundtrack collection.