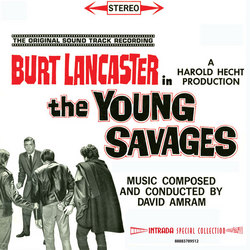 The 1961 film The Young Savages was David Amram's first film score and offered him an opportunity to use fully his varied talents. Amram is a gifted classical composer, also a talented jazz musician, and the score reflects his outstanding ability in both areas. Intrada's premiere release of this score is a reissue of the original Columbia LP program. As originally conceived, "side one" contains the film's jazz compositions, and "side two" contains the sensitive "Theme" and compositions for full orchestra. The director and producer allowed Amram to use jazz as an integral part of the picture, rather than employing it to underscore violence, sadism or narcotics—which is usually the case in pictures of the time. Jazz is heard not in the fight scenes but during sequences that showed the neighborhoods where the boys lived.

The significance of David Amram's powerful score for The Young Savages is hard to overstate. Besides introducing the musical world to his motion-picture composing skills in 1961, it showcased the melding of two sizable idioms of then modern music: jazz and contemporary symphonic. With skills developed from theater composition, jazz performance (including the decidedly non-jazz sound of the French horn) and a close association with the New York Philharmonic, first under Dimitri Mitropoulos and later Leonard Bernstein, Amram became a unique voice in American music that still resonates today.

The Young Savages was a powerful picture about juvenile delinquency and crime in the streets of New York, and one man's attempts to bring about justice and peace amidst the turmoil. David Amram mirrors the conflicts and optimism perfectly with his score—both highly charged and highly melodic. Worthy of note here is the playing time of nearly 42 minutes, a generous length for soundtrack albums of the day. The album is newly mastered by Sony from the original Columbia stereo album master tapes assembled in 1961.