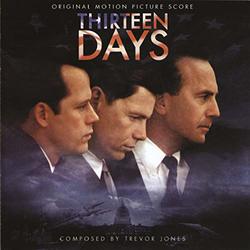 The challenge of a film dramatization of a well-known historic event is that many audience members may not know the details of the event, but already know the ultimate result. As such, a goal of such films is to keep each step in the journey exciting and interesting. Director Roger Donaldson achieves that for the most part in Thirteen Days, his retelling of the Cuban Missile Crisis of October 1962. In large part, this success comes from the solid, though by no means groundbreaking, score by Trevor Jones.

Thirteen Days is told from the perspective of Kenneth O’Donnell, the Special Assistant to President Kennedy (Kevin Costner), as he moves between his wholesome family life and the treacherous waters of Kennedy-era Washington. This allows the audience to feel intimately involved in the decisions that JFK and his team have to make. Given this personalization of the story, Jones has to combine hair-raising suspense with rich emotional landscapes that make us care not only about the politics taking place but the people caught up in it.

The greatest strength of Jones’ soundtrack is its ability to maintain a high level of tension for extended periods without becoming tedious. It is easy to have tense music move an audience briefly, but they usually grow weary of it. In Thirteen Days, however, we never become bored with the sparring that goes on between two Cold War superpowers as well as between Kennedy and the military. We know that the crisis did not end with a nuclear war, but the film and its music keeps us worried about the details of how Kennedy and his team successfully steered us clear of disaster.

The main weakness of the soundtrack echoes a flaw of the film. The inclusion of O’Donnell’s family in the story seems at first glance to be a good idea, as it makes it seem more intimate and gives us a visible sense of what would be lost if there was a catastrophe. However, to a 2001 audience, the family is too white bread and bland. Jones does what he can to keep us interested, but the score does little to captivate us; we are far more interested in the politics and O’Donnell’s relationship with the Kennedys, which is very engaging. Another issue is that the score is not very distinctive. There are several sweeping orchestral pieces mixed in with stirring military drums, which certainly move us emotionally, but there is no memorable theme. Jones may have wanted a purely utilitarian score, in which case he succeeds admirably.