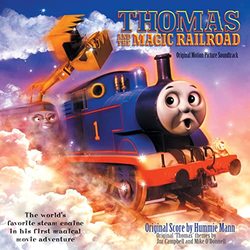 Thomas and the Magic Railroad

Review: Thomas and the Magic Railroad

Thomas the Tank Engine was the star of a children's television show back in the 1980s called "Thomas the Tank Engine and Friends". That show eventually became "Shining Time Station", which delighted audiences for years on PBS. Starring (believe it or not) George Carlin as Mr. Conductor, the television show eventually got developed into a feature film. That film, Thomas and the Magic Railroad starred Alec Baldwin as Mr. Conductor, and while it wasn't a hit, the music in the film contained some great underscore by Hummie Mann as well as a few original songs.

There are six songs on the album. "He's A Really Useful Engine" starts out with some dialogue (there are some lines spattered throughout the album), and then goes into the main theme song that fans of the show no doubt are familiar with. "Shining Time" is a new song that integrates Hummie Mann's new theme for the film, as performed by Maren Ord. It's a great song that fits in perfectly with the rest of the score, dare I say, as a Disney song would. The next two songs "I Know How The Moon Must Feel" and "Some Things Never Leave You" not only were written by Mann (once again with his themes from the film), but the lyrics were written by master lyricist Don Black. They are really well done songs, and again fit in to the film.

The next song is a bit out of place with the rest of the songs - "Summer Sunday" is a nice song by Dominic Gibbson, but it doesn't have the same feel as the others - as if it were more tacked on than part of the story. The last song truly seems out of place - even though the idea of it makes sense. The Atomic Kitten remix of "The Locomotion" is a hard-hitting club mix of the classic oldies tune. It sounds random when played in the context of the other cues, but I suppose that as a novelty cue, it's not that bad.

We then move on to the score from the film. Mann's orchestrations are big and bold, and perfect for a film of this type. There are plenty of "oom-pah" moments, which Mann most likely had no problem in writing, considering his recent work on the P.T. Barnum miniseries. That aside, his themes are quite melodic and moving, as the songs above showed.

In "Lily Travels To The Island of Sodor", Mann builds the score slowly, and hits the climax utilizing the main theme. There are a few moments of hesitation, though, as the theme goes into a minor chord. But ultimately this is a rather upbeat, happy score. The "love theme" from the film is probably best represented in "Burnett & Lady / Diesel 10 & Splodge". It's a soft theme with emphasis on the woodwinds.

In "Diesel 10 Threatens Mr. C", Mann flips the Bernard Herrmann switch, and the score suddenly feels like a throwback to a Hitchcock film! It's tense, dramatic, and exciting. The second part of that cue, "Lily & Patch" brings us back to the softer themes. Some of the orchestration in this part reminded me a bit of Menken's work on the Disney films, but if anything, that's a good thing! "Through the Magic Buffers" is a six and a half minute long piece where Mann pulls out the stops, and does his best renditions of the original themes, which his own variations, of course. You can tell it's building to the film's climax, and it gets more and more heroic as the cue plays out.

The last cue on the album, "The Chase, The Clue & The Happy Ending" takes us through all of the different types of music that we've heard on the album - the "oom-pah" moments, the Herrmann moments, the romantic cues, and of course the big final with the main theme reprised.

This is a pretty good album that showcases some enjoyable songs, as well as Mann's ability to score a variety of moods and styles. Running almost 49-minutes long, this is a rather enjoyable album to listen to. While it might not be the best score Mann's written, it ranks up there on the list as one of his better ones.