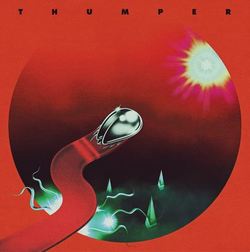 The music was composed under the unique methodology of "gameplay first". Most rhythm games take pre-composed songs and fit gameplay around them. For Thumper, the Drool team first developed the mechanics and levels, and then Brian Gibson created an integrated sound experience that maximizes overall impact.

Unlike most of the great game soundtracks that iam8bit produces on vinyl, the tracks on this LP aren't taken straight from the game. Instead, they've been carefully composed by Gibson as an engulfing, standalone listening opus.

The album is designed by acclaimed artist Robert Beatty (Tame Impala, Neon Indian, Damaged Bug). Not only is Beatty an old pal of the developers, but his art style was a big inspiration on the visual design of the game itself.

As with all new iam8bit vinyl releases, the audio is mastered specifically for optimal vinyl audio quality—this time by Infrasonic Sound.