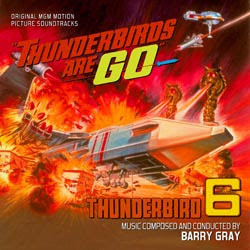 This special release of Barry Gray's thrilling and robust orchestral scores features the world-premiere release of the original score recording (in mono) from Thunderbirds are GO. (The previous LP release was a re-recording).

Thunderbird 6 is presented for the first time in stereo, (previous release was mono). Sound quality varies, as this release was prepared from the best available elements, but producers Ralph Titterton and Ford A. Thaxton took great care to fashion the finest release possible, and Gray's sensational scores now soar to all new heights—with no strings attached!

Researched, compiled and produced by Ralph Titterton and restored, edited, assembled and mastered by Tim Mallett, this special release, limited to 1200 units, also features exclusive, in-depth liner notes by film music writer Jeff Bond and adventurous art design by Mark Banning. Special thanks goes out to Nick Redman and Mike Matessino, without whom this release would not have been possible.