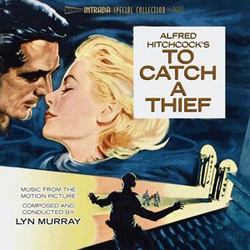 To Catch a Thief / The Bridges at Toko-Ri

In To Catch a Thief, Cary Grant stars as John Robie, a retired cat burglar (aka "Le Chat") suspected of a rash of robberies among wealthy tourists holidaying on the C¶te d'Azur. To prove his innocence, Robie agrees to help the police apprehend the copycat thief, while fending off the attentions of Francie (Grace Kelly), the beautiful daughter of one of the victims, who threatens to expose him to the press. Lyn Murray's frothy main title features a lilting theme ("You'll Love France") and sparkling orchestrations that set the film's lighthearted tone, ending with a descending four-note flute "thief motif" for the mystery caper to follow. The effervescent and playful score that follows has been long overdue for release.

The Bridges of Toko-Ri stars William Holden as Harry Brubaker, an embittered Navy pilot who is forced to join a squadron to destroy a quartet of strategically situated Communist-held bridges. Two-time Oscar-winner Fredric March co-stars as the crusty admiral and Grace Kelly plays Brubaker's na´ve wife. Toko-Ri plays like a docudrama, with most of the big action and flight sequences unfolding without music. Murray's brief score begins with a dramatic "Prologue" featuring a harsh, Asiatic theme on trumpets followed by a yearning melody on strings that morphs into a minor key, setting up the dangers to follow. With militaristic snare drums, trilling woodwinds and a heroic theme for the Navy pilots, "Task Force" underscores the onscreen dedication to the Navy and the opening aerial shot of the aircraft carrier, its planes neatly lined up and ready for battle.

Recorded respectively in 1955 and 1954, To Catch a Thief and The Bridges at Toko-Ri, both scores weathered the years in good condition and all surviving cues are featured here. Most of the major sequences from To Catch a Thief are present and play as the first half of the album. The Bridges at Toko-Ri is an exceptionally dramatic score, albeit a relatively brief one that was bolstered with an abundance of source music. All of the major score cues and much of the source music are featured on the second half of this CD.