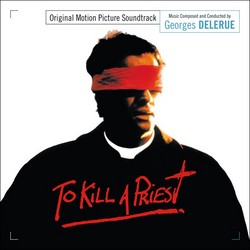 To Kill a Priest

In collaboration with Ramona Music and Colette Delerue, Music Box Records presents the expanded version of To Kill a Priest (Le Complot in its native France).

The music by Georges Delerue centers around a main title song, performed by American folk legend / human rights activist Joan Baez. Her song "The Crimes of Cain" is featured both in the beginning and the end of the film, the instrumental variations appear in several cues throughout the score. Delerue also penned a handful of source cues, included as a bonus section of the album. The new, expanded presentation features six previously unreleased tracks with nine minutes of new music, including a special recording with Delerue humming the main theme from the score.

The CD comes with an 8-page booklet featuring liner notes by Gergely Hubai who discusses the real historical events in addition to the film and the score. The release is limited to 1000 units.