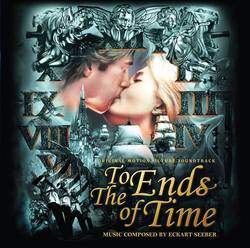 To the Ends of Time

Eckhart Seeber's score for To the Ends of Time is one of the most beautiful, thematically conscious fantasy scores of the last two decades and it's just a shame it isn't better-known. Featuring major battle scenes with choral accompaniment and a haunting love theme for James and Princess Stephanie, the score is also characterized by a number of innovative features for fantasy elements like the magical clock that speeds up time! The album closes with Cristine Seeber's "To the Ends of Time," played over the end credits. The score for To the Ends of Time was recorded by the Ukrainian State Radio and Television Symphony Orchestra and Chorus under the direction of conductor Vladimir Sirenko.

A shorter version of this score had previously appeared on Seeber's own Sonovide label, but this new release by KeepMoving Records contains the whole work with about 20 minutes of previously unreleased music, plus a handsome packaging with a 12-page booklet featuring liner notes by Gergely Hubai, discussing the creation of the film and score based on interviews with the director and the composer.