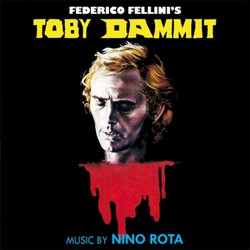 Toby Dammit is the Fellini-directed segment of Histoires extraordinaires (1968), a portmanteau film which also features contributions from Roger Vadim and Louis Malle. All three stories were based on the works of Edgar Allan Poe; Toby Dammit in particular was based on the story "Never Bet the Devil Your Head."

Each segment was scored by a different composer, with Fellini bringing along his usual collaborator, Nino Rota. True to form, Rota recorded a lot more music than what ended up in the final cut; this album, in fact, is about as long as the film itself. Apart from the main "Theme" and the "Demon Child Theme," the highlight is the music written for "The Awards" ceremony, Fellini's nightmarish parody of the Italian film scene set to a brilliant Rota composition that foreshadows the ecclesiastical fashion show from Roma.

The music for Toby Dammit was previously released only on the out-of-print compilation "Fellini/Rota: Three Original Motion Picture Soundtracks," which also included music from Satyricon and Roma (both also re-released by Quartet Records). This release features all the music, including a special bonus suite which was only included on a promotional CD by the Digitmovies label more than ten years ago, and a track with the voices of Fellini, Rota and conductor Carlo Savina working together during the recording sessions. Mastered by Claudio Fuiano from the session master tapes, the package includes an 8-page booklet featuring liner notes by Gergely Hubai, discussing the film and the score.