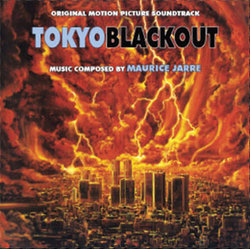 Shuto Shoshitsu (Tokyo Blackout) contains a musical score that is not only an interesting one but also one that is something of a notable anomaly within the genre of soundtrack or film music. Interesting because it was created by the award winning and world renowned movie music composer Maurice Jarre and an anomaly because it is somewhat unusual for a Japanese movie to be scored by a composer from outside of that country.

Jarre combines endearing and dramatic orchestral colours with synthetic textures and sounds, the composer fusing elements from these sources and interweaving them to create a work that contains numerous appealing, memorable and exciting moments. The score is certainly more of a synthesised work than a symphonic one, as the use of electronic outweighs that of conventional or traditional instrumentation. This however does not detract anything from the overall quality of the work, as the composer created not only a serviceable score which enhances and supports the picture well, but also penned a collection of themes that combine to become a fluid and pleasant listening experience.

The soundtrack was originally released on to compact disc in Japan in 1987 and has been long out of print, thus has become something of a rarity for soundtrack collectors, so this new edition will be welcomed amongst Jarre devotees.