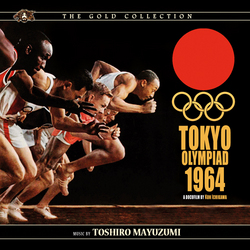 Kronos Records The Gold Collection is very proud to present the soundtrack CD of Kon Ichikawa's Tokyo Olympiad, considered by many to be one of the greatest documentary-films ever done with a musical score that according to many has contributed not little to the cult status of Ichikawa's film.

To score the film Ichikawa chose an old collaborator of his, fellow Japanese artist Toshiro Mayuzumi, with whom he had already worked together on various films. The music is as rich, colourful and varied as the film it was written for. Big dramatic orchestral pieces written to accompany physically hefty sports to lighter more agile motifs written for sports demanding more stamina and elegance than sheer brawn. These beautiful pieces blend in beautifully with the more high spirited jazz tunes for small ensemble that were accompanying the city shots of Tokyo by night and more mundane scenes that make both of the film and score a truly beautiful experience.

We are very proud to present to you the original score in the same order as issued on vinyl in 1966 with an additional 20 minutes of music that are not present on the vinyl version. A big, beautiful, emotional and elegant score.