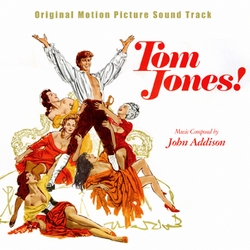 Kritzerland is proud to offer the original motion picture soundtrack from Tom Jones, with music by John Addison.

A good deal of credit must go to composer John Addison, who came up with a score that was as fresh, vibrant, ravishing, rowdy, and raucous as the film. Whether it's the harpsichord accompaniment to the silent-movie opening, or the gorgeous love theme for Tom and Sophie, or any of the other wonderfully melodic themes he created, it's no surprise he not only won the Academy Award, but also that the Tom Jones soundtrack was a huge best-selling album on United Artists Records.

The original LP was released in both stereo and mono—or was it? For years, it's been presumed that the stereo tapes were lost, because only the mono album master was in the vaults of MGM. However, as anyone who owned the stereo pressing knew, it wasn't stereo at all—both LP releases, despite what the album cover said, were mono—no stereo tapes ever existed—the score was recorded and released in mono only.

The original LP sequence had nothing to do with the way the music was presented in the film—the tracks were wildly out of film sequence order, cues were edited together, and for the most part the track titles had no correlation to what the music was actually accompanying in the film. For this release, we have put the tracks in film order, and we've unearthed the film's original "End Titles" music, herein released for the first time. The track titles have been changed to reflect how the music is actually used in the film.

As a bonus, we also include the entire original LP sequence. This release is limited to 1000 copies only.