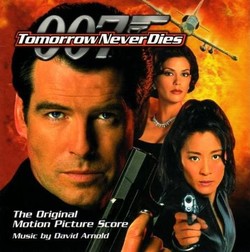 When it was first released on A&M Records in 1997, David Arnold's score to Tomorrow Never Dies was incomplete. Sure, many score releases are missing cues, but the problem with this release was that in the rush to get the album out before the film, the recording of the score had not been finished when the album was "locked". So the resulting album was missing most of the third act of the film, which took place in Vietnam, and the climax on the Stealth Ship. Now coming to the rescue is Chapter III Records, which took it upon themselves to listen to the fans that were clamoring for the rest of the score, and release it! With over 25 minutes of previously unreleased music, this album can be said to be the "final" score album for Tomorrow Never Dies.

The first 11 tracks are the same score tracks that appeared on the original album. But then we get seven more cues of unreleased score! Arnold's mixture of large Barry-esque Bond orchestrations and techno rhythms are still there, including the great opening cue, "White Knight", and the great action cue "Backseat Driver". Some of the new material includes the "Bike Chase" through Saigon, as well as the climactic battle on the Stealth Ship at the end of the film. There tends to be more of an "ethnic" Asian flare to some of these new cues, and as it worked rather well in the film, it's a nice addition to have on this album.

David Arnold did a great job taking over as Bond composer, and has retained the feeling that John Barry created (including some well placed homage's) while retaining the originality and freshness of his own style. In fact, one of the nice bonus cues on this album is an 11-minute interview with David Arnold conducted by Jon Burlingame. It provides some very nice insight into Arnold's approach to the score, and to "taking over" from John Barry.

Sure there are plenty of cues still missing from this album - but no one ever claimed that this would be the "complete" score. Just that it would be expanded. One thing missing, however, that would have been nice to have is the song that Arnold wrote for the film, "Surrender". Performed by k.d. lang, this song not only used the themes from the film, but was done in the classic Bond style - and she had the right voice. With only just over an hour of score, and then the 11-minute interview, I can imagine that there just wasn't room (and the licensing issues would have been numerous). But that aside, this is a great album which fixes a mistake made over 2 years ago, and it's great to hear the rest of Arnold's score on an album.