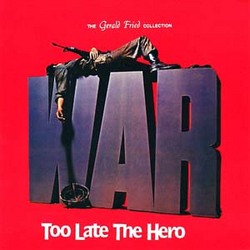 Too Late The Hero

In Robert Aldrich's pulsating World War II thriller, Lawson (Cliff Robertson), an American naval officer specializing in Asiatic languages, is sent to the Pacific theater to assist a group of British soldiers (Michael Caine, Denholm Elliott, and Harry Andrews) in a seemingly simple mission—knock out the enemy's key transmitter. But the allied soldiers soon realize they are up against unsurpassable odds and that hopes of survival are sliver thin. Lawson takes charge of the group and devises a daring plan of escape.

Robertson lends Too Late The Hero emotional depth with his portrayal of Lawson as a reluctant hero transforming himself into a leader as the suicidal nature of the mission grows ever clearer. In the tradition of Aldrich's earlier action-adventure extravaganzas The Dirty Dozen and The Flight of the Phoenix, Too Late The Hero features a formidable cast, exotic sets, cataclysmic special effects, and an ever-tightening grip of suspense, making the film a worthy addition to the director's canon of macho, white-knuckle forays deep into the lethal epicenter of war.

The score is composed and conducted by Gerald Fried.