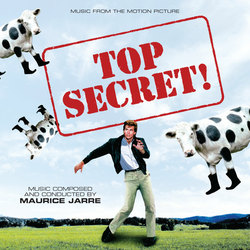 The creative team behind the legendary Airplane!, Jim Abrahams, David Zucker and Jerry Zucker, followed that comedy classic with this wildly uproarious and unlikely send-up of WWII action dramas and 60's Elvis films. The film would launch Val Kilmer's film career—he shines here as both a skilled comic actor and singer – and composer Maurice Jarre's rich orchestral score sends the laughs into the stratosphere, his wonderful music in perfect dramatic juxtaposition against all the on-screen hilarity.

Disc One of this 2-CD presentation marks the world premiere of Maurice Jarre's film score recording (the original score album was re-recorded), along with bonus and source cues, while Disc Two features the CD world premiere of the film's funny (and extremely catchy) retro-rock songs, (including "Skeet Surfing", "How Silly Can You Get?" and more), along with the remastered original 1984 score album. Produced by Dan Goldwasser and mastered by Chris Malone, this limited release of 2000 units features exclusive, in-depth liner notes by writer Daniel Schweiger, (featuring new interview comments from the writer/directors and others), and art direction by Dan Goldwasser.