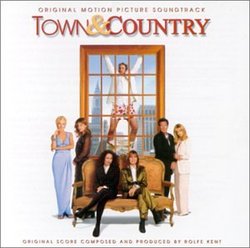 Performed by
The London Session Orchestra

While it wasn't exactly a hit with the critics or the public, Town and Country is certainly a film that bears mentioning.  It had a rather troubled production, and took over three years to make from start to finish.  About six months before the release of the film, composer Rolfe Kent came on board to score this comedy of errors, and his delightfully whimsical and quirky score has been released by New Line Records, along with a few swingin' oldies.

First up on the album are five songs that make an appearance in the film.  Patsy Cline's "Walking Dream" and Louis Armstrong's "Ain't Misbehaving" are two standouts along with Django Reinhardt's "Minor Swing".  But it's Royal Crown Revue's "Honey Child" and Pink Martini's "Donde Estas, Yolanda?" that really get your fingers tapping.  The songs help set the upbeat mood of the album, and basically grease you up so that Rolfe Kent's score goes down smooth and easy.

Similar to his work on (the ill-fated) Gun Shy, Kent's score is thematic and light, as heard in the "Opening Title".  A rather upbeat tune played primarily with steel guitar, with a nice bass line and strings accompanying the main theme, it's a track that delights, and the rest of the album pretty much follows suit.  "Following Griffin" is more dramatic, and "Doors Slam" is a more subdued calmer cue, with a secondary, more melancholy theme.  "From the City to the Hamptons" revisits the main theme in a jaunty way, but also gives us another more upbeat rendition of the secondary theme.

In what can best be described as an homage to the Henry Mancini scores for the mad-cap Blake Edwards comedies, Kent uses a set of male and female vocalists singing (slinkily) in "Porter and Mona Kiss".  The "Putoo Theme" cue is comprised entirely of rhythmic percussion, and the album ends with a sweeping rendition of the secondary theme in "Return to the Hamptons".

If you enjoyed Kent's scores to Election and The Slums of Beverly Hills, you'll most likely enjoy this one.  It's very much in the style of a Marc Shaiman score, but without the baggage.  It's light and airy, and fun to listen to.  The only bizarre thing I can complain about is the packaging.  For some reason the songs and score are separated out, so that after track 5 ("Pink Martini), the numbering resets - so "Opening Title" (which is the 6th track) is labeled as track 1.  It makes it difficult to jump to a particular track because you always have to add 5 to the number.  Still, that's a minor glitch on an otherwise enjoyable album that runs a tad over 45-minutes long.