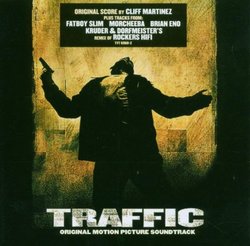 Traffic is the compelling story of many disparate worlds, tied together through illicit drugs, sometimes interacting but often remarkably remote from each other. We soon find that each of these worlds contains many surprises. There is the aggressive new drug tsar with the daughter who seems perfect, but is not. And the affluent housewife with a businessman husband who seems ideal, but is not. There are the police on both sides of the U.S.-Mexico border whose nobility or corruption never seems entirely certain until the end. Director Steven Soderbergh successfully portrays this expansive milieu, switching among the different scenes in a frenetic but always manageable way. To achieve this, Soderbergh uses every cinematic tool available, from distinctive dialogue to succinct acting to varied color schemes for each locale. One of the most important tools he uses is a powerful soundtrack by Cliff Martinez, which captures the essence of each of these worlds and its characters.

Martinez works with Soderbergh to create what few composers can, a compelling, emotionally rich ambient score. Of course, there are rhythmic portions and cultural flavoring where appropriate, but like Soderbergh's camera work, this soundtrack creates a broad, vivid landscape. This is one of the score's main strengths, establishing the environment where these characters live. In addition, it conveys a world on the brink, yet also a world we should care about. Something bad seems like it is always about to happen, specifically to people we should care about.

From the first track, "Helicopter," this tension draws us in and keeps us involved. And though ambient music usually serves a film best in creating atmosphere, there are truly beautiful, emotionally stirring moments here, like with the use of Brian Eno's "An Ending (Ascent)" at the end to show one of the characters getting what they have longed for; it is a powerful, cathartic moment. If one were to criticize this soundtrack, the weakness would be the weakness of the genre of music itself. Ambient and electronica is usually soft and amorphous. There are percussive, rhythmic parts throughout, but if someone wants something symphonic or purely melodic, this soundtrack only provides sparse reprieve, with tracks from Wilhelm Kempff and Fatboy Slim.

As I left the theater, I overheard someone say how incredibly "realistic" the film was, which is ironic, given the highly affected color schemes in the visuals and the blatantly manipulative score. But that is what good movies do: use the tools of the medium to convey a truth greater than can be found in the individual components. Cliff Martinez's score is essential to this triumphant work. This is the most successful collaboration between Martinez and Soderbergh since Sex, Lies, and Videotape, and in many ways tops the work in that film. If you like the film, or enjoy ambient music with a strong emotional thread, I highly recommend this soundtrack.