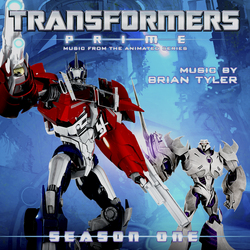 Music From The Animated Series by Brian Tyler (Season one). It has been three years since the Decepticons last attacked Earth and the Autobots still await their return. After the death of Cliffjumper, the Autobots fight to protect the Earth from the Decepticons and befriend three young humans and face the returned Megatron who has been missing for three Earth years. Megatron plans to use Dark Energon to raise an undead army of Cybertronians and defeat the Autobots. The Autobots destroy his space bridge and Megatron is believed killed in the process. Starscream becomes the new Decepticon leader.