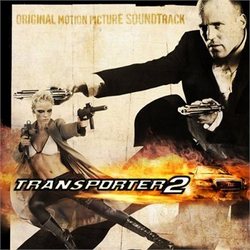 Transporter 2 is one of those brainless Hollywood action flicks that panders to the lowest-common denominator, while at the same time providing an excuse for gleefully absurd stunts and action sequences. Jason Statham is back as Frank, a professional transporter, who is currently doing a friend a favor and chauffeuring the son of a DEA official. Unfortunately, a consortium of Colombian drug lords want this official killed, and figure that the best way to do this would be to kidnap the son - and infect him with a contagious biological weapon that he can transmit to his father, and then to all the other officials at a big conference. Frank will discover all of this, while fighting to get the kid back. Basically, boilerplate storyline used as an excuse for action.

Musically, the score by Alexandre Azaria works for the film, but doesn\'t offer anything new to the listener. "Naughty Girl" is for the opening sequence in a parking garage, but the level of excitement for the first half of the cue is not reflective of the slow camera tracking shots on screen. You would think that it was a more action-heavy scene (and it becomes one, towards the end). The music stood out right away during the opening titles, and not in a good way. Otherwise, the music is that usual combination of techno electronica and action that one expects for these films. "Kendo" has a bit of interesting percussion, and dramatic elements, and the absurd ending of the film is showcased in "Jet Boxing", where the main theme is at least used a few times. Certainly not anything to holler about, but considering this is Azaria\'s first Hollywood studio film, I can see some potential in his work.

The bulk of the album is filled with songs that either did or didn\'t appear in the film. Honestly, I can\'t remember. But a lot of them have a good rhythmic beat, and even the sultry German actress/model Kate Nauta (who appears in the film as the lingerie-clad assassin) has a pretty good number on there with "Revolution". Anggun\'s "Saviour" is a good track as well. I felt that "Voodoo Child starring Afu Ra" by DJ Cam was out of place with the rest of the album - the rap just didn\'t flow with the songs.

The film is Hollywood escapism at its finest, and the album will work for most people as yet another one of those "songs and score" CDs that show up in the used bin shortly after release. If that\'s your thing, pick it up there.