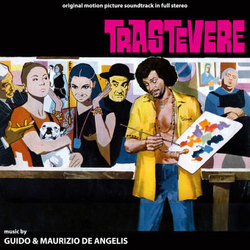 Digitmovies is pleased to present on CD, for the first time ever, complete and in full stereo, the OST of the legendary Guido and Maurizio De Angelis from the movie Trastevere.

At that time, IT Discs released a 33 rpm (It ZSLT 70005) with eleven selections with a total time of 28:54 minutes and a 45rpm (It ZT 7024) with the tracks "Trastevere" sung by Nino Manfredi and the instrumental "Kerry." For our CD, lasting a total of 59:35 minutes, in addition to the stereo master tapes of the album of 1971, we also had access to the master, in stereo, of the original recording session, which allowed us to use every note recorded at that time. The OST is based on the main topic of popular taste "Trastevere" (in the words of director Tozzi), introduced in the title track by the voice of Nino Manfredi (Tr. 1) and reprised in instrumental version (Tr.7, Tr.13, Tr.19). This exciting melody is alternated with other themes composed for the other characters in the film, such as "Grandma's dance" (Tr. 3) folk flavoured, but with modern arrangements and Indian music on the sitar (Tr.4). For Kerry, the De Angelis brothers wrote a country tune (Tr.8, Tr.15), but the negative events that disrupt the life of this character are highlighted by dramatic and rock flavoured orchestral passages, (Tr.5, Tr.10, Tr.12, Tr.17, Tr.20, Tr.23). We include among the various extras a version with a different ending of "Grandma's dance" (Tr.14) and a rare alternative take of the vocal by Nino Manfredi (Tr.24).