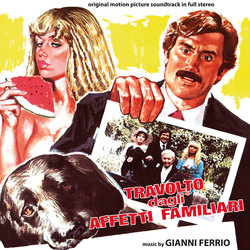 For Travolto dagli affetti familiari, Gianni Ferrio composed an enjoyable score where the recurring main melody is happy and carefree for the male protagonist and is alternated with romantic orchestral phrases. We used all the music recorded in stereo during the recording session. A dance track called "Disco Boogie" (not by Ferrio) was not included.

We are releasing the OST from Il Vizio Di Famiglia from the stereo master tapes of the original recording session. Unfortunately a country style song is missing, which is played during the scene where Edwige Fenech is on a motorcycle (but it could also be archive material). The composer created spirited and funny background music played by an orchestra and synthesizer, which is alternated with lounge music with sounds of pop music as well as the mysterious moods of giallo films.