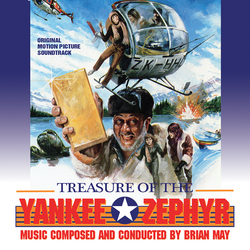 Treasure of the Yankee Zephyr

Dragon's Domain Records presents the soundtrack release of Treasure of the Yankee Zephyr, featuring music composed by Brian May.

To score the film, the producer turned to composer May with which he'd already established a creative relationship after hiring him for some of his other recent films. May's music for the this film focuses on energizing the action, reflecting and acknowledging the humor between the characters, and imitating their personalities in the midst of propulsive, exciting orchestrations for brass, string, and percussion during the lengthy chase scenes.

Previously released on compact disc by 1M1 Records in the early 1990s, Dragon's Domain Records is excited to bring Treasure of the Yankee Zephyr screaming back from the past, newly remastered by Digital Outland, including a special bonus track. Added to this album is a remix that loops the Main Title music, sans the comic segment that begins with the entrance of Barney's wobbly helicopter, in order to present a fuller and purer version of the composer's powerful main theme. The booklet includes exclusive liner notes written by author Randall Larson, with the participation of producer Antony I. Ginnane.