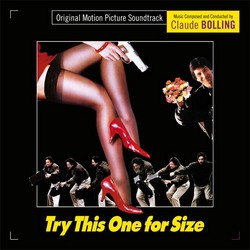 Try This One for Size

Music Box Records presents the World Premiere CD release of Try This One for Size.

The score was provided by French composer Claude Bolling. Following up with the Bond parallels, the movie opens with the bombastic theme song "The Key" with Dee Dee Bridgewater assuming the Shirley Bassey role for the franchise (she went on to perform other songs for the franchise as well). Several cues are based around this song, but other memorable moments include the brilliant Russian-sounding cues for the central McGuffin, a steamy erotic theme for the relationship of Bradley and his henchwoman, plus a lovable chase theme for Lepski's chase sequences featuring his trademark red Peugeot. On the whole, Bolling's music is a fun, retro-flavored throwback to the classic '60s sounds of the James Bond films with an '80s twist added as flavoring.

The CD comes with an 8-page booklet featuring liner notes by Gergely Hubai who discusses the series, the film and the score. The edition is limited to 350 copies.