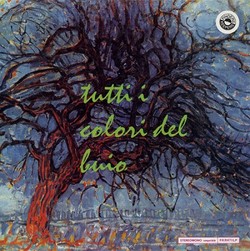 As part of a devoted series of releases focusing on Bruno Nicolai's soundtrack music to the films of Edwige Fenech, Finders Keepers proudly unveil what is perhaps the crowning moment for both actress and composer with the film that inaugurated them (alongside director Sergio Martino) into the critical Giallo royal family in the early 1970s.

Presented here with previously unpressed tracks as an alternative to the extremely rare 1973 Gemelli library edition, this Finders Keepers special release includes the recently uncovered 1972 hard-hitting left-field psychedelic pop themes that unified yet another unholy trinity comprising of sitar wielding Alessandro Alessandroni (in true Pawnshop Braens Machine mode) and Italian cinematic songbird Edda Dell'Orso to create (under Nicolai's gaze) what is regarded by many unified euro horror video collectors and vinyl detectives as the cream of this well furrowed crop.

To claim this score as Nicolais' all time best is perhaps a little ambitious for a versatile composer of such acclaim and widespread appeal, but for fans of that unique window of unhinged musical opportunity which came with the Giallo boom of the early 1970's you'll be hard pushed to find a record that covers all bases from an alternative universe where Fabio Frizzi, Goblin and Walter Rizzati were (haunted) household names.