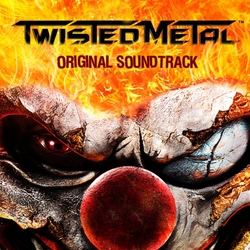 Twisted Metal combines ultimate destruction, dark humour, vehicles, and weapons that act as extensions of each character. The game follows four characters who participate in the Twisted Metal Tournament hosted by Calypso. The tournament results in one lone player, the survivor, to whom Calypso awards one wish- often money or power. However, this time Calypso has much more to offer. At the same time one player is trying to bring Calypso Industries down.

Composer Michael Wandmacher created individual themes for each character faction for Twisted Metal. Wandmacher stated, "The primary role of the music is to give each character their own sound to portray their individual struggle." Wandmacher created Sweet Tooth the Clown's theme and his ice cream truck's theme using large amounts of dissonance combined with dark industrial sounds. Mr. Grimm, a modern day Josey Wales, has a biker rock theme with sad undertones imitating his need for redemption. Dollface has a distorted lullaby theme as if written by demons from hell mirroring her struggle with her physical imperfections. "For Calypso, the mastermind behind the tournament, I created an epic theme. I used gothic tones created by pipe organs, guitar, and strings," Wandmacher stated.