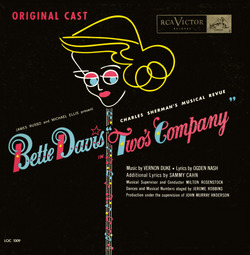 Bette Davis was making a triumphant return to Broadway in the 1952 revue Two's Company... until the show began its previews, when she promptly collapsed onstage on opening night. Davis was perhaps in over her head (song, dance and comedy were not her strong points) in this otherwise charming revue, with a score largely by Vernon Duke (music) and Sammy Cahn and Ogden Nash (lyrics). Two's Company was one of the last of the sophisticated, satirical revues, a kind of show that television killed off, and its reputation has been held hostage to Davis's troubled involvement. But Sheldon Harnick, Horton Foote and Peter DeVries were among those contributing material to the show, and the choreographer was no less than Jerome Robbins. Hiram Sherman won a Tony for his expert comedy work in this fascinating relic of Broadway's past. Now available for the first time on CD and digital download.